It has been a busy couple of months since the Slateman – a number of more ‘fun’ weekends and a couple of big races. In summary (apologies for the length!):

May Bank Holiday – Tour of Wessex – great weekend as always, with the opportunity to ride with some super strong girls, see how the pros do it, and recce the course for Exmoor 70.3. We were lucky with the weather and had another great weekend in Somerton. 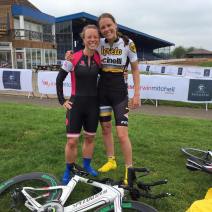 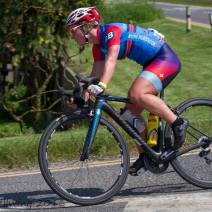 June 5th/6th – Tour of Cambridgeshire – another race I loved last year – TT on the Saturday and road race on the Sunday. This year was all about seeing progress compared to last year. Was thrilled with 3 minute improvement in the TT and to come 3rd in age group in the road race.

June 24th – Exmoor 70.3 – this was one of my key races of the season, being age group only race, and well suited to my strengths. Race prep had all gone well, and I was looking forward to seeing what kind of result I could get. I knew quite a few people racing, and there were a couple of guys from the club whose feet I was hoping to sit on to drag me round the swim. Having placed myself pretty near the front of the swim start I missed a lot of feet during the initial few hundred metres – but setlled in quite quickly and by the first turn had found the 2 guys from the club and was able to sit on their feet all the way round (thanks guys!). I came out of the swim in around 28mins, a big PB and 4th/5th lady out of the water. The run up to transition definitely gets the heart rate up, and I had an ok transition to get on the bike.

After the initial climb I settled in nicely, and was enjoying the long stretch down to the steep descent. Suddenly it didn’t feel quite right, and my front tire deflated in front of me. I rolled on to a marshall point and at this point was fairly resigned to my race being over. Frustrating as I was feeling good, had already caught a couple of the girls in front of me (30k in), and knew I only had myself to blame for not carrying any spares. . .  Being about as far away from transition possible I started walking, as I was getting cold by this point. A lot of competitors offered me spares – but not any on tubular tyres, and the foam one guy gave me unfortunately didn’t work. However it was great to see how supportive people wanted to be and the number of offers of help I got! After an hour and 10 of walking, a guy pulled up next to me, with everything I needed! Having told one of the marshalls I would have to pull out suddenly there was hope I could at least finish the race. . . Tyre changed and offering the guy profuse thanks (I can’t remember his name – so hopefully he knows who he is and how grateful i am!) I was back on my way. By this point the speedy men were coming past me to finish their second lap, and I knew I had a long day ahead of me.

The bike route is awesome, and whilst I was not where I would like to be in the race I tried to just push as much as possible to at least get a good training session. Onto the run and again I was passing people coming into the finish, knowing I had 3 long hilly laps to go! I was fairly emotional coming into the finish, feeling annoyed at myself for not being prepared and missing out on a good race opportunity, but thankful for it to only have been a puncture and nothing worse. On the plus side, I won’t be going to anymore races without puncture repair, and I now know how to change a tub on the side of the road!

Back to familiar territory and a race series I love. With my Exmoor result I was even more keen to smash Hever and see how much I could improve on September’s time. Getting everything prepped as the first athletes were coming into transition from the Bastion was a good way of getting in the mood for racing – completely inspired by those taking on such a tough Iron distance race – but maybe one day. . .

Down to the swim start from the beautiful lake setting – I wasn’t entirely sure who the best people would be to try and stick near, so went out hard trying to find feet – failed so settled into my own rhythm. As we turned down the river I found a couple of guys swimming along at a similar pace so settled in behind them to try and conserve energy.

Coming into T1 and had a relatively good change – was informed by a marshall I was 3rd lady, so now it was time to chase! About 10 minutes into the bike it started raining – having had my fair share of rain this year wasn’t too phased by this, was actually quite nice as meant it wasn’t too hot. After about 20k I caught Alice on the bike – knowing what an awesome runner she is I knew I had to put a lot of time between us to keep away from her on the run. Coming to the end of the first lap I hadn’t caught the other girl yet, so tried to up the pace slightly. About 5k into the second lap I caught her, and nearly got a bit annoyed as she was sat on my wheel for quite a while, over the wettest and windiest bit of the course! Finally managed to put some distance between us though, and rode as hard as I could for the rest of the bike course.

Coming into the run and the weather had started to brighten, and I saw my dad on the corner which gave me a boost. My aim on the run was just to keep a good pace and try and push it on the last lap to see what sort of time I could do. Towards the end of the first lap I caught up with a guy who I ran with for a bit – was nice to have some company and we both managed to push each other on a bit. Getting towards the end of the second lap and I was pretty sure the win was mine for the taking. I managed a bit of a sprint finish and it was great to come into the finish with dad cheering me on. It is one of the first races where I have felt relatively comfortable the whole way round, and was delighted to have a 35 min improvement from September (around 10 mins of this due to me going the wrong way on the bike last time!).

I know have 4 weeks until Wiesbaden 70.3, which will be a good indicator of how I am shaping up for Australia. Will has given me a good block of training so looking forward to working hard and seeing what further improvements I can make.

Thanks to iPrintStuff for a super speedy turnaround to print my race suit, Will Clarke for his great coaching, TrainXhale for providing an intuitive platform to analyse my training on, TheSweatExperts for keeping cramp at bay, Torq for supporting me with my nutrition, Walker Brothers for their super speedy wheels and Lloyds for being a supportive work place.

Also thanks to Barney for putting up with my depressed mood after Exmoor and helped get my confidence back for Hever, and Nick who I literally cried on post Exmoor!