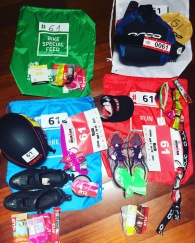 Saturday was the big day. . . The day I have been training for over the last 6 months and that I was excited to see what I could achieve given some of the training sessions I had done. I gave myself some time to properly reflect on the race, to try and give a more objective view – so here goes.

– alarm goes off at 4.15am – to be honest I was awake already but had slept pretty well, and excited to get up and be getting ready

– normal breakfast of oats, banana and honey plus coffee and I was ready to go

– heading down to the start and final touches to transition – gels on bike, pumping up the tires and generally ensuring everything was ready – atmosphere wasn’t as pumping as other races I have done but kept it relatively calm

– time for a quick warm up beforehand quick good luck pep talk from Barney and Bridget before heading into the pen to get a good position – by this point normal pre race nerves kicking in a little bit, but mainly just wanted to get going! 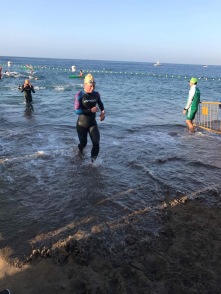 – managed to get myself near the front and to the right, so whilst the start was pretty hectic being a mass start I probably had it slightly better than people who weren’t able to get into the AWA section

– normal load of people not able to swim in a straight line cutting right in front, people swimming into me, people trying to swim over my legs and stop start in some parts of congestion

– coming out in 1.03 was pretty happy considering some of the argy bargy and was then excited to get on with the rest of the race 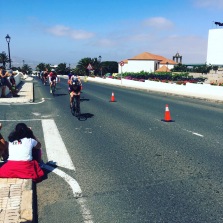 – transition I took fairly slowly, making sure I got everything on right, getting smothered in suncream and mentally thinking about objectives for the bike

– almost immediately I felt like I was in a bit of trouble – I felt nauseous and not at my best – however I just focussed on forcing the gels down and trying to stick to my target power – I was getting overtaken going uphill but was catching people on the flatter sections and downhill (a first!)

– the next part of the bike I absolutely loved – I felt great, holding my power felt comfortable and I was constantly overtaking people – the scenery was great and I saw Barney, Bridget and Sean a couple of times

– my favourite part was the descent from Mirador Del Rio until the approach to nazarat, where I hit a bit of a mental block and struggled to hold power and didn’t seem to be going anywhere

– the last 20k was a bit better post another toilet stop (mainly because it’s downhill!) and I was very happy to be coming into t2

– this lasted all of 2k and then it all started falling apart – my tummy decided that it had had enough and it was going to cause absolute chaos – bring on the next 35k of constantly hunting the next portaloo, some enforced walking, not being able to eat anything and wishing the day was over

– some great support from people urging me on and when my tummy wasn’t shouting at me to stop I felt quite good running, and the last 4K I managed to power on through and hold a good pace

Crossing the line I was mainly overwhelmed with frustration and annoyance that the goal I had been working so hard towards had been ruined by something I really thought I had solved in terms of tummy trouble. Even after a lot of reflection I am not sure what went wrong – I did everything as I had in practice, and couldn’t identify anything obviously that I had done differently or that might have caused the upset stomach. At that point I thought Kona was out of the question as I was so far behind where I was hoping to finish I just assumed I was way down the age group ranks.

By pure luck, turns out I had come 3rd, and the lady in 1st Had already qualified, and Lucy in 2nd didn’t want her spot – so amazingly I managed to claim my Kona slot, which I am over the moon about. It is definitely not in the fashion I was hoping for, and I am nervous about what I can change to ensure the same doesn’t happen out there, but feeling very lucky to have had a bad race and be able to still claim that spot – as they are so competitive now that very few people can say that.

Thank you everyone for all the support – in particular Barney and Bridget for being my integral support system in the run up to and over Lanzarote weekend – I would have been even slower around that run without you there telling me it was ‘just’ another 13k. . .

Thank you to Orca for the wetsuit and kit (black is a good colour!), Giant St Pauls for the awesome bike – still managed an average bike split despite the 2 toilet stops, ClifBar for the nutrition – just a shame I wasn’t able to take any on the run, Precision Hydration for keeping me hydrated – probably would have needed a drip at the end without your tablets, Lezyne for the tools to get my bike ready, Skechers for the trainers (sorry I wasn’t able to do them justice).

Thank you also everyone who was tracking me and cheering me on remotely – knowing so many people were tracking the race certainly kept me trying to push through the run. . .

Also – thanks to the pros – it was absolutely epic watcing the Brit ladies absolutely smash it – and Lucy Gossage – your words post race really helped me rationalise it all a bit more!

Onwards and upwards as they say!

Race week is finally here! It seems like a long time ago I signed up to IM Lanza, and it definitely feels like the longest build to a race. So thought I would pen down some thoughts pre race, as post race I may be too broken for a while!

As mentioned, longest training block (with a couple of races) running up to the big day – a few stats from when I started in earnest for this race mid November 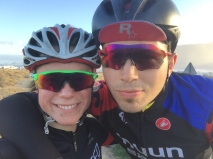 My better half – seems to put up with the tiredness (all the time!), the peanut butter binges, the depression post a bad training session, and my missing his birthday weekend for the second year in a row for a race. . .

Hoping to do his coaching proud on Saturday!

Friends and Family – putting up with me being rubbish at finding the time to see everyone enough, or when I do not being the most talkative! Looking forward to a long family weekend post Ironman, and a friends wedding amongst other things. Hugely appreciate all the support you give – it wouldn’t be possible without that.

So that is my Ironman journey so far – I feel like the fitness is there so now I just have to get out there and enjoy it!